Home » Blog » 7,525-carat emerald; one of the largest emeralds discovered in Africa
Blog

7,525-carat emerald; one of the largest emeralds discovered in Africa 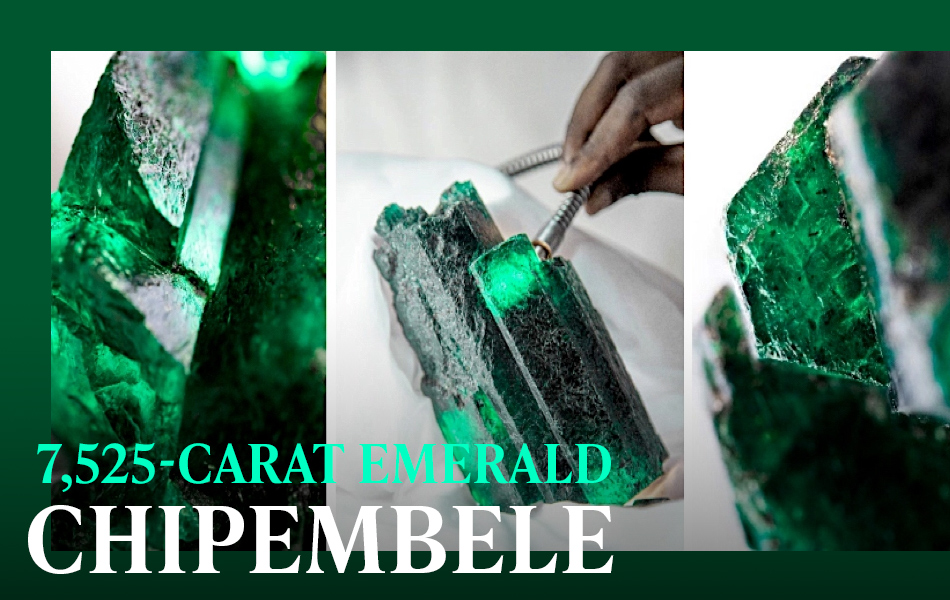 A 7,525-carat emerald weighing 1.5 kilograms has been discovered in the Kagem mine in Africa, which is the biggest of the three large emeralds mined from the same area since 2010.

The emerald was named Chipembele – which translates to ‘rhino’ in the local Bemba dialect and the largest – to date, followed by the 6,225-carat Insofu meaning ‘elephant’ mined in 2010 and the 5,655-carat Inkalamu or ‘lion’ in 2018.

According to UK-based Gemfields, which owns and operates the emerald mine in partnership with the Zambian government’s Industrial Development Corporation, the naming of uncut emeralds is a practiced tradition reserved for the rarest and most remarkable gems.

The gemstone was discovered in July by geologists Manas Banerjee and Richard Kapeta – leader of the team who also discovered Inkalamu in October 2018 – whose team were surprised by the discovery and remarked that the gemstone looked like a rhino’s horn, hence its name.

According to Jackson Mtonga, assistant manager, Kagem Sort House, “A key Gemfields tenet is that Africa’s gemstone wealth must contribute meaningfully not only to host-country economies, but also to conservation efforts, host communities and the next generation by way of education, healthcare and livelihoods projects.

“We are delighted that the legacy of Chipembele will support rhinoceros conservation efforts, bringing a positive impact to conservation communities in Zambia.”

Chipembele will be auctioned and a share of the proceeds will assist funding the black rhinoceros conservation efforts of the North Luangwa Conservation Program in Zambia.

Winning bidders shall have the option to have their stones subjected to the provenance proof service using a unique DNA nano-tag identity certification developed by the Gübelin Gem Lab of Switzerland.

The certification process, also known as the Emerald Paternity Test, involves the use of nanoparticles coded into the stone containing details such as its origin, miner, mine location, and date of production.

The synthetic diamond problem for fancy colour diamonds – Part I