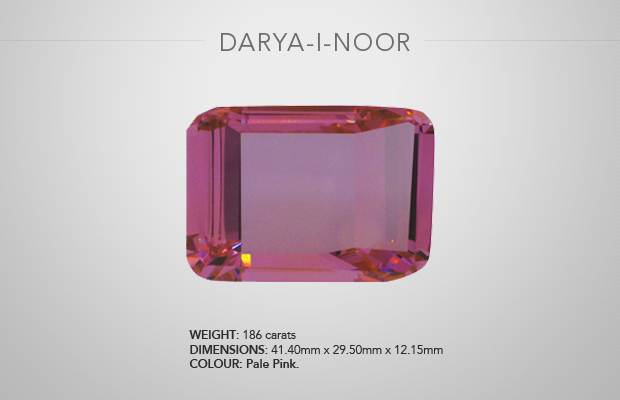 Considered the most celebrated diamond in the Iranian Crown Jewels and one of the oldest known to man, the 186-carat Darya-i-noor is a crudely-fashioned, pink, table or taviz-cut diamond with a name that means river of light.

The Darya-i-noor’s weight of 186-carats is an estimate made by the Gemological Institute of America and the exact weight is unknown because the stone cannot be removed from its setting without risking major damage.

In 1827, Sir John Malcolm, a British emissary to the Persian Court, described the stone along with the Taj-e-mah as the principal gems in a pair of bracelets valued at one million sterling pounds.

During the reign of the next shah, Nasser-ed-Din, the Darya-i-noor was mounted in an elaborate frame surmounted by the emblem of the Imperial Government of Iran, and set with 457 diamonds and four rubies. It is still mounted in that same frame today.

Many stories abound of the diamond’s passage over the last hundred years. Some researchers contend that the Darya-i-noor was acquired by the East India Company when the British subdued Punjab in 1849.

It was then said to have been exhibited at London’s Crystal Palace Exhibition in 1851 before returning to India in November 1852. After the creation of Pakistan, the Darya-i-noor was deposited in the Imperial Bank of India.

Presently it is said to be preserved in a vault of the bank – a claim that survived an examination by experts in 1985.

Another account suggests the Darya-i-noor was stored along with other valuables by Mohammed Ali Shah in the Russian Legation during the Persian Revolution. Shah allegedly claimed the items were his personal property; however, as a result of intense efforts made by the freedom fighters, this token of Nadir’s conquests was restored to the country.

And in an entirely different spin, Iranian officials at the Central Bank of Iran in Tehran told the Gemological Institute of America in 1964 that the Darya-i-noor had never left the treasure vaults, where it holds a prominent place among the Iranian crown jewels.

This was also authenticated in 1966 by Dr. VB Meen of the Royal Ontario Museum.

What is known is that three Canadian gemologists went to Iran to inventory the Iranian Crown Jewels in 1969. They noticed the Darya-i-noor and Nur-ul-ain diamonds were virtually the same colour and clarity and wondered if these two might not be pieces of the Great Table.

After some analysis, they concluded that the Great Table had been broken into two pieces between 1794 and 1834: the larger becoming the Darya-i-noor; the smaller, the Nur-ul-ain.

When one thinks of diamonds, Tijeras, New Mexico is not the first place that springs to mind, but it’s home to Scott Sucher, the Master behind the research and replicas that form the World Famous Diamonds.

Scott Sucher’s lifelong interest in geology commenced when a local museum hosted an exhibition of famous diamonds made of quartz when he was just a young boy. Whenever he could find time in his busy life, he published a collection of internet articles and lectures.

After retirement, Sucher returned to stone cutting with renewed vigour when a Discovery Channel producer requested help for a program on famous diamonds. The 14-month collaboration resulted in Unsolved History: the Hope Diamond, which first aired in February 2005.

The program gave Sucher the chance to handle the unset Hope diamond, the 31-carat Blue Heart diamond and Napoleon’s necklace – a 234-diamond necklace that Napoleon gave to his second wife Marie-Louise.

Sucher then worked with the Natural History Museum in London to recreate a replica of the historic Koh-i-noor. The entire process took 12 months – photo analysis took four months alone – and concluded in July 2007. The cutting alone took 46 hours, and Sucher likened it to “brain surgery, as one mistake can be non-recoverable.”

Sucher continues his work in partnership with many other experts and museums in the field. If anyone knows anything about the world’s most famous diamonds, it’s Scott Sucher.

Bonsai Buddhism and the art of business