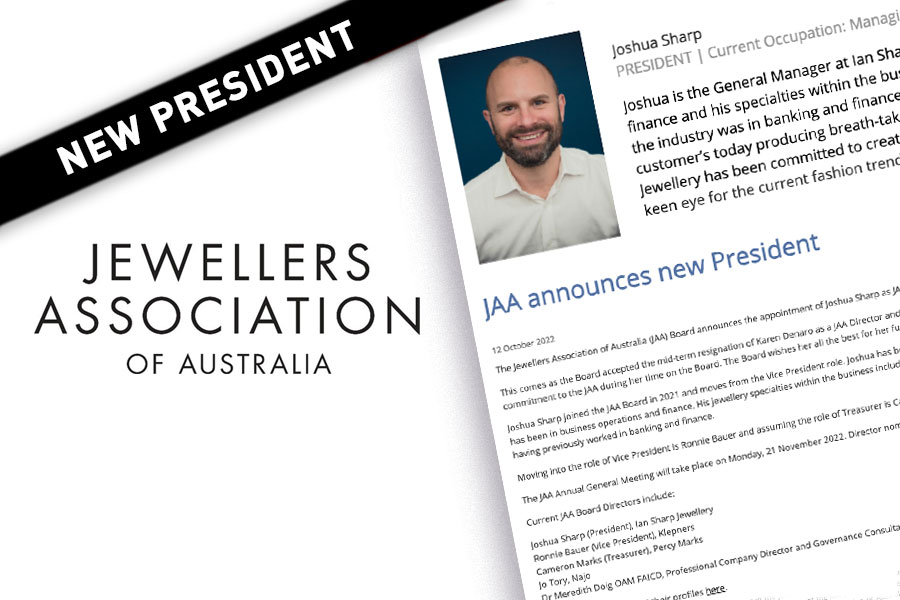 The Jewellers Association of Australia (JAA) has released a statement confirming the appointment of Joshua Sharp as president.

The Australian trade representative body found itself unexpectedly absent a leader late this past week week following the shock resignation of then president Karen Denaro.

Denaro served just 10 months as president, having joined the JAA’s board in January of 2021.

“The JAA board extends their gratitude and thank you to Karen for her enthusiasm and commitment to the JAA during her time on the board,” the JAA statement reads.

“The board wishes her all the best for her future endeavours.”

Sharp also joined the board in 2021, and prior to Denaro’s resignation, occupied the vice-presidency. Sharp has spent the past 15 years as general manager of Ian Sharp Jewellery, a business located in Melbourne.

“[Sharp’s] jewellery specialties within the business include diamonds and second-hand jewellery,” the JAA statement continues.

“Joshua also comes to the board with a strong background having previously worked in banking and finance.”

Ronnie Bauer (Klepner’s) has been appointed vice president while Cameron Marks (Percy Marks) moves to the role of treasurer. Jo Tory (Najo) and Dr Meredith Doig are the other members of the board.

The JAA Annual General Meeting will take place on 21 November. Director nominations for the Board from members will open in the coming weeks.