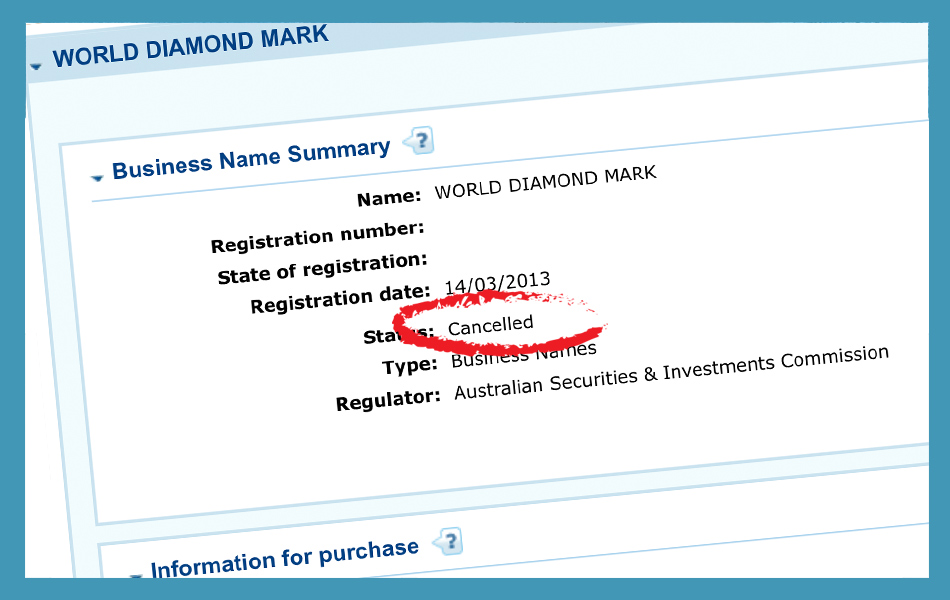 The mystery plaguing the practices of the Diamond Dealers Club of Australia (DDCA) has led to questions over the Club’s claims and therefore its adherence to New Zealand trade law.

Among those concerns was the suggestion that the DDCA – led by president Rami Baron for 14 of its 15 years – represents New Zealand on the international stage.

The DDCA website states the Australian club is the “New Zealand representative of the World Federation of Diamond Bourses”.

While the claim has been made on an Australian-based website, New Zealand authorities confirm that the Fair Trading Act (FTA) would still apply across the so-called ‘ditch’.

According to the Commerce Commission, New Zealand’s competition, consumer and regulatory agency, businesses cannot behave in a way that is misleading or false.

“They also can’t make misleading or false statements about their products or services’, including price, standard, quality, origin or history and endorsements or approvals…,” the Commission’s website states.

Despite previously reported requests for clarification, there has been no evidence provided by Baron and/or the DDCA to substantiate the claim that it represents New Zealand.

Further, WFDB president Yoram Dvash told Jeweller, “The WFDB is not familiar with a diamond bourse in New Zealand” and when contacted in August, both the Jewellers Association of New Zealand (JANZ) and the Jewellers & Watchmakers New Zealand (JWNZ) knew nothing about the claims.

Spokespeople for the two jewellery organisations were unaware that the DDCA purportedly represents their country as part of the international organisation.

New Zealand’s Commerce Commission and Fair Trading general manager Vanessa Horne confirmed the circumstances in which the law may be applied.

She added, “The Act applies to all businesses ‘in trade’ in Aotearoa New Zealand, meaning businesses – local and international – that supply goods or services in Aotearoa,” meaning that New Zealand law applies to Australian-based organisations that mislead or deceive.

Horne was unable to comment specifically on the DDCA’s specific circumstances, however, she was able to outline the criteria required for a business to warrant legal scrutiny.

“In considering whether to investigate issues that come to its attention, the Commission considers the available information for its relevance to the Commission’s responsibilities and current work programme, its enforcement criteria and priority areas for new enforcement work,” she said.

In another development concerning the operation of the DDCA, the WFDB and the unusual relationship between the WFDB’s World Diamond Mark (WDM) and Baron’s private companies, a business name registered with the Australian Securities and Investments Commission (ASIC) has been abruptly cancelled.

As previously reported, the WFDB launched the WDM as a not-for-profit marketing initiative at its 35th World Diamond Congress in 2012.

The WDM Linkedin page states that it “is a company wholly owned by World Diamond Mark Foundation, an organisation that was found (sic) by major diamond industry stakeholders and controlled by the World Federation of Diamond Bourses (WFDB). The aim of the World Diamond Mark® is to ensure the health and growth of the diamond and diamond jewellery sector in the luxury industry.”

It came to light that the business name ‘World Diamond Mark’ was registered with ASIC by Rami and Liora Baron in March 2013. It was registered under their family partnership and renewed in March this year.

Baron was contacted by Jeweller on 2 September with questions concerning the World Diamond Mark. He opted not to reply, however; ASIC records show that six days later the name was suddenly cancelled.

Jeweller contacted ASIC and was told by a spokesperson that, “It [WDM registration] belongs to an entity called Rami & Liora Baron currently operating the business name ‘Baron Jewellers’. World Diamond Mark is an historical business name [and] was cancelled on 8 September 2022.”

The cancellation of the World Diamond Mark registration within one week of Baron being queried about it is made even more curious by the previous renewal on 14 March of this year – the nine year anniversary of the initial registration in 2013.

Given that the World Diamond Mark is ‘controlled’ by the WFDB, and Baron sits on the executive committee, the trade and business committee and is also chair of the promotion committee, Jeweller sought clarification from Sharon Gefen, head of public relations.

The sudden cancellation of the business registration follows the similarly abrupt deletion of the intellectual property of the Gemological Institute of America (GIA), the World Jewellery Confederation (CIBJO) and WFBD, and which was being used for promotional purposes on the website of Jewelclaim, a private business owned by Baron.

The GIA, CIBJO and WFBD confirmed that Baron’s business did not have approval to use the marks and logos.

The accompanying claim and promotional text “The Australian Jewellers Consortium [Jewelclaim] maintains a direct relationship with the WFDB. This global pool of knowledge and experience is priceless” was also deleted.

More than six weeks after a routine enquiry about the membership number the DDCA, Baron has remained silent. In a surprising statement, Geffen admitted the WFDB “does not monitor the number of members of any of the bourses” despite a membership ‘number counter’ featuring prominently on the WFDB website.