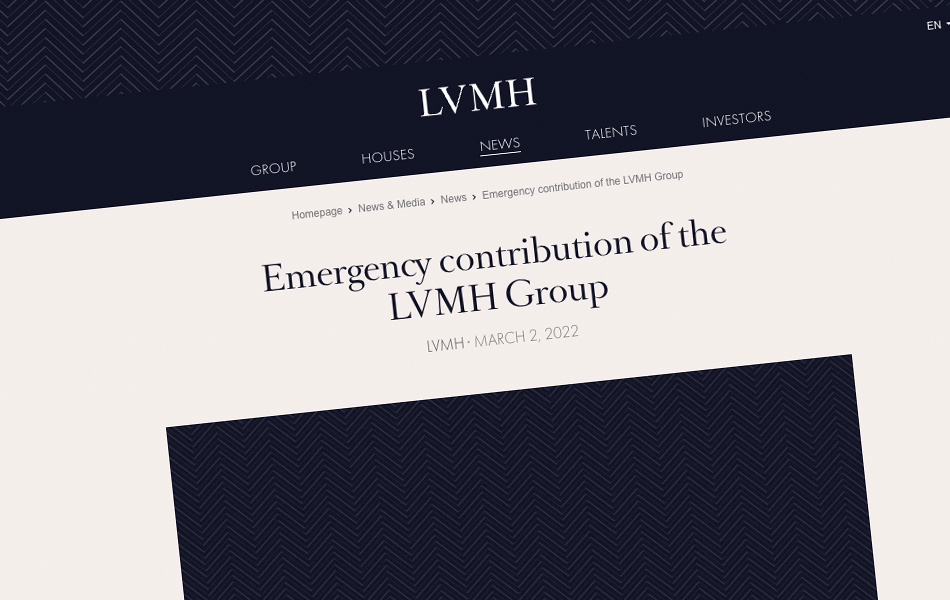 French luxury conglomerate Louis Vuitton Moët Hennessy (LVMH) has announced it made an emergency contribution of €5 million ($AU7.32 million) to support relief operations for those affected by the ongoing conflict between Russia and Ukraine.

The donation is the first tranche of contributions made to the International Committee of the Red Cross(ICRC), according to a statement on the group’s website.

“The LVMH Group is closely monitoring the tragic situation in Ukraine and stands alongside all those severely affected by this war,” the group stated, noting that its first priority is the safety of the group’s 150 employees in Ukraine.

A fundraising campaign has also been launched across the LVMH network to raise funds for the ICRC for its ongoing relief operations in war-torn Ukraine.

“The LVMH Group’s crisis committee is constantly tracking the situation and will adapt its measures as needed,” the group added.

The LVMH Group – which owns Bulgari, Chaumet, and Fred, TAG Heuer, Zenith, and Hublot – has ceased store operations in Russia together with Richemont, Hermes, Chanel and Kering Group in light of the ongoing Russian invasion of Ukraine.

The decisions followed Swatch Group – which owns Omega, Longines, Tissot, and Breguet, among others – which announced it has suspended exports and trading operations after economic sanction measures were imposed on Russia.

Kering, Chanel and Hermès have made separate announcements of the closures on LinkedIn, while Kering and Chanel committed to donate funds to support relief efforts.

Meanwhile, the De Beers group has donated $US1 million ($AU1.35 million) to “aid organisations that are operating in the region and providing support to those impacted by the war.”

“De Beers Group has been shocked by the violence in Ukraine and inspired by the bravery of its people,” the UK-based conglomerate stated.

The group’s Anglo American Foundation, through its Employee Match Funding scheme, will also match employee contributions of up to £1,000 per person per year. The program is open to all permanent Anglo-American region employees who will donate money for relief efforts.