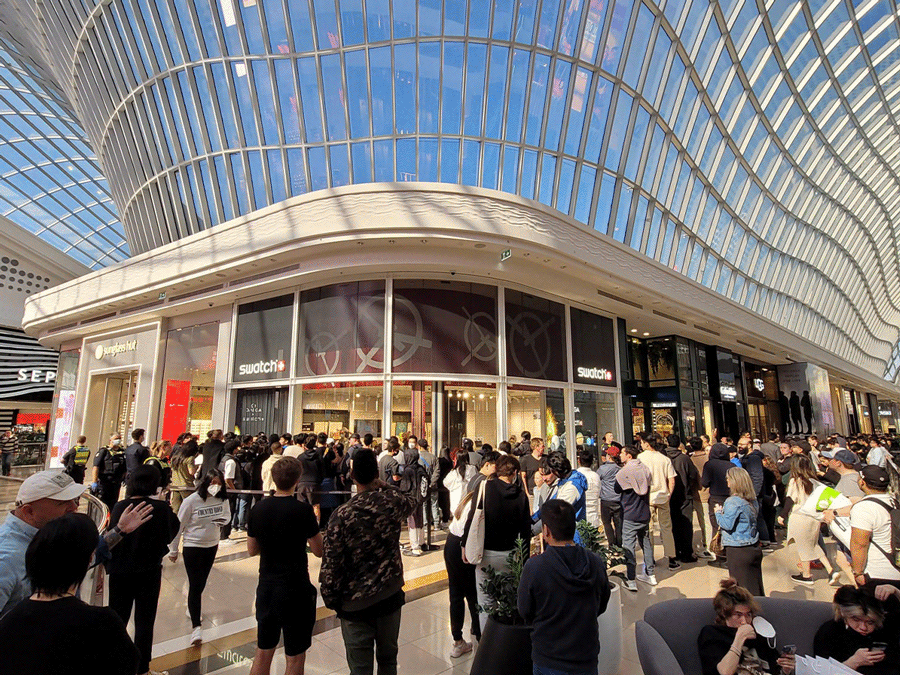 Enthusiasts hoping to become owners of the Omega x Swatch Speedmaster Bioceramic MoonSwatch will still need to attend a store in-person, with a spokesperson confirming that online access will not be offered.

In March of this year, the release of the Moonswatch collection caused mayhem outside of stores across the world, including in Melbourne and Sydney.

The Moonswatch is the result of a collaboration between Omega and Swatch and was priced at $AU380 per watch. That retail price is dramatically cheaper compared with other Omega Speedmaster products, which list for more than $AU7,000.

The watch collection offers customers the chance to own a timepiece close to the iconic Omega Speedmaster at a fraction of the cost. Online auction sites such as eBay quickly featured watches listed at more than five times the retail price following the launch.

At locations in Melbourne and Sydney, lines formed in the early morning outside stores, however, due to the limited availability of the product, hundreds were left disappointed.

Swatch Group CEO Nick Hayek has now confirmed that the watch will not be sold online, telling Fratello “There’s no emotion in online buying.”

“It’s a carefully produced Swiss-made watch and not a commodity.

“The MoonSwatch is not about to make as much money as possible in the shortest possible time period. So why should we sell it online?”

Hayek noted that after two years of pandemic restrictions, “it was about time to celebrate and to bring the people back on the streets, meet together, and revive the brick-and-mortar stores.”

There are 11 models in the MoonSwatch collection representing the solar system, with each model designed after one planetary figure. Each planet from Mercury to Pluto is represented, as well as the Sun and Moon.

According to a Swatch spokesperson, there is currently a shortage of Moonswatch products, with the company’s website attributing this to “overwhelming demand from Swatch fans all over the globe.”

“We’re working around the clock behind the scenes to make the 11 unique watches and are replenishing our selected Swatch stores regularly with this special collaborative collection between Swatch and Omega,” the website reads.

The statement noted the watches are not limited-edition timepieces, so consumers may be able to purchase them soon once stocks are replenished.

The watch collection was launched on 26 March, with Australia being one of the first countries to launch the model ahead of the US and European markets.

The watches are designed and modeled after the iconic Omega Speedmaster Professional Moonwatch, which was made famous after US astronaut Buzz Aldrin wore the watch during the 1969 mission to the Moon.