More confusion over DDCA and WFDB operations and practices


The mystery and ambiguity plaguing the operations and practices of the Diamond Dealers Club of Australia (DDCA) and the World Federation of Diamond Bourses (WFDB) has extended into a range of new issues that both organisations refuse to answer.

What began as a routine media enquiry into the history of the DDCA has developed into a range of matters that remain not only unresolved, but largely unacknowledged.

Readers will recall that the first significant roadblock encountered by Jeweller came following a query about the Australian club’s precise membership number.

In a bewildering turn of events the WFDB has now effectively admitted that it does not know the number of members of any of its representatives, including the DDCA.

Not only did the WFDB not make enquiries following our request for membership information, on 6 September Sharon Gefen head of public relations told Jeweller: “The critical point, from our side, is that the WFDB does not monitor the number of members of any of the bourses that belong to the federation.”

This admission seems startling, especially given that visitors to the WFDB’s homepage are greeted with a prominent ‘number counter’ that quickly counts from zero up to 28,780.

The implication is that the website is counting the WFDB’s individual membership numbers in ‘real time’ from its 29 bourse members.

It seems unrealistic and illogical for the WFDB to display a ‘worldwide bourse member’ figure via a number counter while simultaneously claiming that it “does not monitor the number of members of any of the bourses that belong to the federation”, as Gefen stated.

This admission, paired with Baron’s prior refusal to provide any specific membership information, would suggest that the most generous interpretation of the homepage number counter is that it’s fictitious or, at worst, the WFDB does monitor its member numbers but refuses to divulge the Australian figure.

Another matter that seems to be at odds with the WFDB’s admission that it doesn’t track membership figures is the organisation’s By-Laws, specifically those regarding applications for membership.

Its By-Laws seem to contradict, or at least be at odds with, Gefen’s claim that the individual bourse membership is not tracked, specifically those regarding applications for membership.

The By Laws, understandably, explain a rigorous approval process which includes the executive committee “appointing 2 (two) representatives from 2 (two) different Bourses to visit the applicant bourse, to examine the manner in which it operates, or intends to operate, the identity of its members, etc. and to report in writing to the Executive Committee about its findings.”

This means that not only has the DDCA president chosen not to make the membership figure public, the WFDB’s own position and statements about membership seem irreconcilable.

Since the first article on 14 August – Mystery behind the Diamond Dealers Club of Australia – Jeweller has become aware of other issues, which not only remain unexplained by the WFDB and Baron but also seem baffling.

In 2012 at the 35th World Diamond Congress in Mumbai, the WFDB announced the launch of the World Diamond Mark – a not-for-profit marketing initiative.

At the time it was reported that the program would “lead to the beginning of Authorised Diamond Dealers, an international strategy and action plan based on education, confidence and generic marketing to generate sustainable returns for the industry”.

While the World Diamond Mark is “controlled by the WFDB”, Australian Securities and Investments Commission (ASIC) records show that Rami and Liora Baron registered the business name in March 2013. It was registered under their family partnership and renewed in March this year.

Jeweller contacted Baron on 2 September asking whether the registration was endorsed and/or approved by the WFDB ‘board’ and minuted at the time, and whether other individuals related to the WFDB also registered the same business name in their resident countries.

Baron did not respond to the email, and the same questions were posed to Gefen who indicated that the WFDB had no knowledge of the matter, even though Baron sits on the executive committee.

She advised that the WFDB does not “collect or ‘investigate’ the private businesses of our officers.

“We are an association of diamond bourses which is dedicated to promoting a common set of diamond trading practices and standards, to enable a successful worldwide trade in rough and polished diamonds.”

In addition to the World Diamond Mark, Jeweller also asked whether ‘Women In Jewellery’ – another business registered by Baron in May 2021 – is connected with, or related to, the WFDB?

Gefen did not specifically answer this question.

The queries about the World Diamond Mark and Women In Jewellery were raised because Baron is also chair of the Promotion Committee and is a member of the Trade and Business Committee as well as sitting on the WFDB executive committee.

As previously detailed, ASIC records show that Baron is also registered as the DDCA’s sole representative, and the DDCA’s registered address is Market Street in Sydney, the same address as a number of Baron’s private businesses.

Jeweller has previously reported that Baron’s private businesses are often intertwined with his positions on the WFDB and DDCA.

For example, the Australian Jewellers Consortium – known as Jewelclaim – is owned by Baron.

The website displayed the official logos of the WFDB, the Gemological Institute of America (GIA) and the World Jewellery Confederation (CIBJO) without approval, and despite Baron and or his business not being a member of the GIA or CIBJO.

The logos sat alongside promotional text that read: “The Australian Jewellers Consortium maintains direct relationships with such organisations as the GIA, CIBJO, and the WFDB. This global pool of knowledge and experience is priceless.”

The GIA and CIBJO intellectual property were subsequently removed without explanation following questions to Baron and the publication of the article.

And while the WFDB seemed to have no knowledge about its logo appearing on Baron’s insurance claims website, on 15 August Gefen retroactively sanctioned the use by stating, “Rami Baron is a valued member of the WFDB executive committee, and is in close contact with the organisation.”

However, this open endorsement – which had contradicted her previous advice  – was later changed when the WFDB logo and promotional text were suddenly removed from the Jewelclaim website a few days later.

In another appearance of intermingling, the DDCA’s Facebook page shared a promotional post for Q Report Jewellery Insurance, another business owned by its own president, Baron.

The Q Report post reads: “No matter how well you look after your jewellery, sometimes the unexpected happens. Here’s what you can learn from some common Australian insurance claims.”

At least one mystery appears to have been resolved, albeit in an embarrassing manner.

Following Jeweller’s 14 August story, it came to light that the DDCA claimed to be the “New Zealand representative of the World Federation of Diamond Bourses”.

As previously reported, the DDCA became the Australian representative on the WFDB when it successfully joined in 2008, and Baron has been DDCA president for 14 of the club’s 15-year existence.

However, when contacted, The Jewellers Association of New Zealand (JANZ) and the Jewellers & Watchmakers New Zealand (JWNZ) knew nothing about being represented on the international organisation by Australia or Baron.

Greg Harford chief executive JANZ said, “I’m sorry, I don’t have any background on this issue. Sounds like you would be best to contact WFDB for clarification on this.”

Jeweller sought clarification from the WFDB asking: ”Does New Zealand have a diamond bourse and on what, and whose authority does the DDCA claim to represent New Zealand?”

In another extraordinary admission, and despite the DDCA claiming to represent an entire country, WFDB president Yoram Dvash said, “The WFDB is not familiar with a diamond bourse in New Zealand”.

While he did not answer on whose authority the DDCA claims to represent New Zealand, it can be reasonably concluded that either the DDCA (or the WFDB) appointed itself as the official representative of the New Zealand jewellery industry without seeking authority or ‘permission’ from the local industry.

At the time of publication no one has been able to explain which organisation – or to whom in New Zealand – the DDCA has been reporting to as that country’s representative.

Dvash’s response did add that, because of its geographical proximity, the DDCA “can assist New Zealand diamond dealers in precious stones and jewellery that wish to join the bourse and enjoy its activities in being their voice in the WFDB”.

This claim is somewhat different to Baron and/or the DDCA claiming without authority to be the “New Zealand representative of the World Federation of Diamond Bourses.”

Other matters remain unexplained by Baron.

For example, the DDCA website lists a vice-president and chairwoman of promotion. Jeweller has sought clarification about the position of treasurer, the management of the club’s financial affairs and whether the DDCA’s annual financial reports were independently ‘audited’ or ‘reviewed’.

Dvash advised that, “Such information [the person that bears the title and role of treasurer] is in the possession of the individual bourses and relates directly to their internal affairs and autonomy”.

Despite the WFDB’s assurances of “trust, transparency and integrity among all members of the industry” a simple question about the membership number of the DCCA remains a mystery, and perhaps a secret, despite a membership number counter on its website. 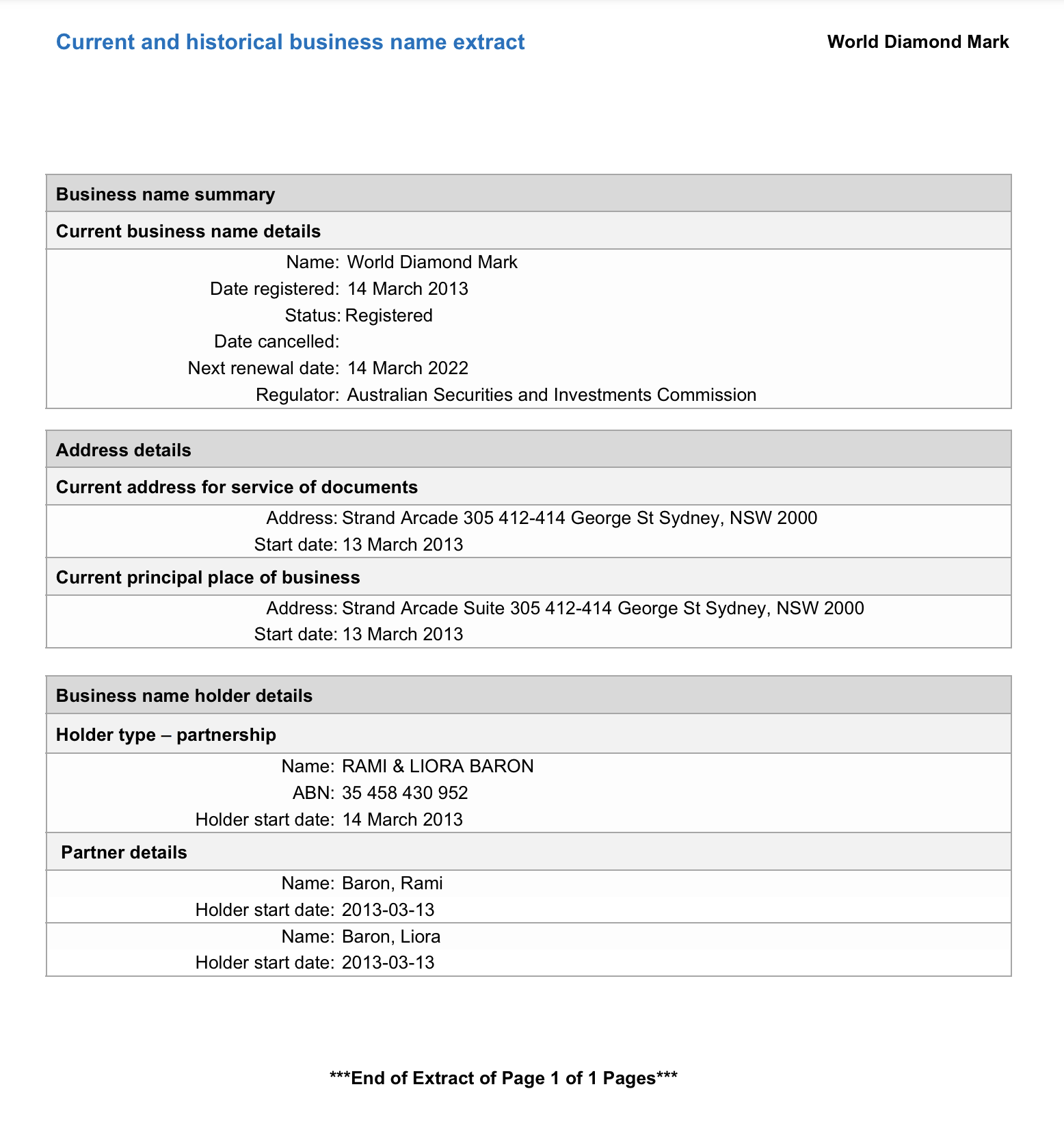