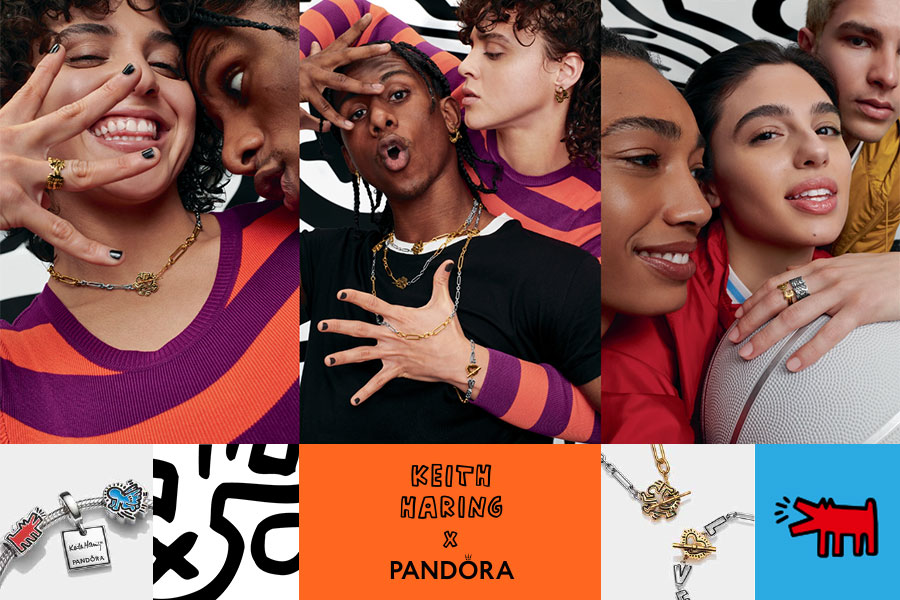 Pandora has unveiled a new creative jewellery collection in collaboration with US artist Keith Haring.

The collection named Keith Haring X Pandora is inspired by the artist’s principles of love for all and features 12 jewellery pieces consisting of eight bracelet charms, two rings, a necklace and earrings.

The pieces are crafted in reflection of the New York culture 1980s highlighted by its distinct bright yet bold tones, mixed metals and colours. Haring was inspired by the city’s graffiti artists whose marks covered New York’s subway trains.

Born in 1958, he began to draw in white chalk over the black paper used to cover vacant advertising panels. Before his death Haring established a foundation to maintain and enhance his legacy of giving to children’s and AIDS organisations. He died in 1990.

According to Filippo Ficarelli, creative director, Pandora, “When creating the collection, we did a sort of time travel, connecting directly with the philosophy of an artist that uses his art and vision for inclusion, building a culturally relevant, visual language that is so timeless that it arrives to us as a powerful voice.”

Along with fellow creative director, Francesco Terzo, Ficarelli noted that, “We imagine a dialogue with Keith Haring, together using jewellery as a canvas or “a wall” for sharing a language that we can all speak.”

“The campaign’s key focus is to highlight Keith Haring’s enduring influence on our culture and to celebrate his pioneering vision that art is for all, aligned with Pandora’s promise to create accessible jewellery that empowers everyone to express themselves in their own way,” the company added in a statement.

The Keith Haring x Pandora collection will be available for a limited time online and in Pandora stores from 29 September – 29 November 2022.

Founded in 1982, Pandora remains headquartered in Denmark and has extended its reach to more than 2,700 stores in 100 countries worldwide.