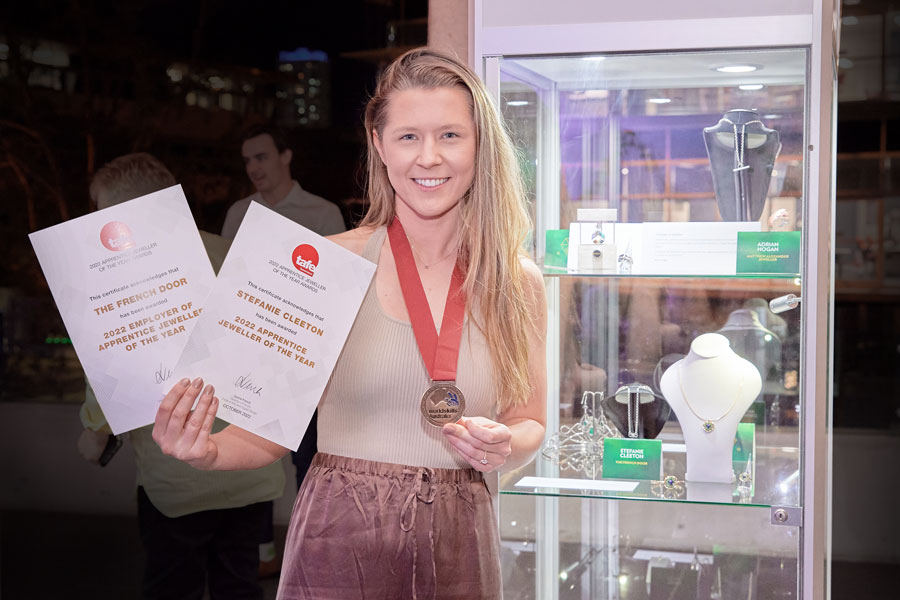 Stefanie Cleeton, a jewellery apprentice with The French Door Jewellers, is the winner of TAFE Queensland’s prestigious Apprentice Jeweller of the Year Awards.

Stefanie Cleeton, a jewellery apprentice with The French Door Jewellers, is the winner of TAFE Queensland’s prestigious Apprentice Jeweller of the Year Awards.

The awards aim to celebrate the talent of students through a creative challenge that forms their final assessment.

More than 60 guests attended the event on 4 November at TAFE Queensland where the theme for contestants was ‘alchemy’.

After winning the 2021 Rising Star Award, the 23-year-old returned this year to claim the top prize with her submission featuring three jewellery pieces.

“Because alchemy is very dark, the theme was a challenge, so I created a pendant, a ring and a hinged bangle with my own ‘evil eye’ twist on it,” Cleeton said.

“Having won the Rising Star Award in previous years, I knew the judges would be looking at the design, manufacture, finishing and my portfolio. They assess the pieces’ practicality, durability and wearability, and I felt that I had done enough to place well.”

Cleeton added that jewellery became her passion after a conversation with a friend at school.

“After leaving school, I did a lot of different jobs to find a career I enjoyed. Then a friend of mine showed me an opal ring that she’d made – and we discussed the manufacturing process. I knew jewellery was the career for me,” she said.

“I emailed jewellers in Brisbane and the Sunshine Coast asking for a job, and, luckily, The French Door in Brisbane responded. After two days of work experience, they offered me an apprenticeship.”

“Incredibly, students created the stunning pieces of jewellery on display – young people, who are just starting in the industry,” Kinnane said.

“Everyone was amazed by the range of talent entering the industry – it’s exciting to see this cohort of apprentices graduate with the skills they need to be employable now and well into the future.”

As a part of the competition, students are given four weeks to create three pieces of jewellery that meet criteria fitting the award’s unique theme which changes each year.

Other award winners include:

UAE to chair Kimberley Process in 2024

Confusion about JAA plans for a mega-association