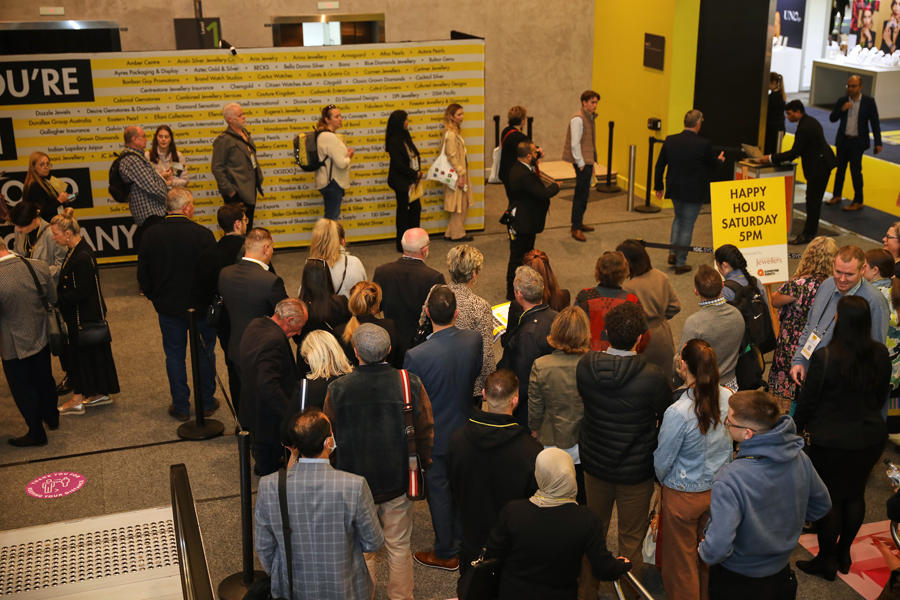 Warm smiles and firm handshakes marked the beginning of new partnerships for many visitors to the International Convention Centre (ICC), while for others, the event was the chance to reconnect with long-term associates and friends for the first time since 2019.

More than 140 exhibitors – many being international companies attending the IJF for the first time – lined the walls of the ICC’s cavernous open-air hall and the feedback was positive.

The opening day (Saturday) was surprisingly busy as buyers were eager to finalise new orders. These same exhibitors often reported an even busier Sunday, which has traditionally been the day with the strongest sales.

For others, the opening day was marked by plenty of browsing, with Sunday the strongest day for sales as visitors returned to the stalls which had most captured their interest.

There was one piece of feedback that was uniformly reported by exhibitors and buyers alike – ‘it’s great to be back under one roof at the IJF after so long apart’.

“The biggest surprise was the Saturday – it was a very different start compared to what we’ve seen in recent years, prior to the pandemic, and it was reminiscent of fairs from yesteryear.

“From those that I’ve had the chance to speak with, Saturday and Sunday were both really strong days, however the first day felt more like the second we’ve become accustomed to.”

Fitz-Roy added: “In my mind, the success of this event has really reaffirmed the position of this Fair at the event that unites the industry.”

Upon first entering the IJF, visitors were greeted by the newly branded BECKS stand – formerly the Peter W Beck Company – with the strong red-and-black design the latest move from the South Australian-business.

“With the gigantic rebranding effort we’ve undergone, I think we all came here feeling a little trepidation – you’re never really sure how something like this is going to be received, and now we can all go home knowing it was worth the effort.

“People really attended this fair with the intention of buying – that was clear from the opening of day one, and when you’re an exhibitor dealing with people eager to buy and sign on the dotted line, that’s exactly what you’re hoping for.”

For jewellery and watch distributor Timesupply – which serves more than 800 retailers in Australia and New Zealand – the expectations heading into the IJF were clear. Director Ken Abbott said there was little reason to delay confirming a return in 2023.

“This has been such a great Fair that we’ve decided to finalise our place at next year’s event already, we’ll certainly be back,” he said.

“Our expectations heading into the weekend were to simply reconnect with our customers face-to-face and hopefully connect with some new people, and we’ve achieved both of those goals so we’re happy.

Abbott continued “It was great to see so many people face-to-face – especially those from New Zealand who for obvious reasons we haven’t been able to see for a long time.”

For some exhibitors, the IJF isn’t just about completing sales, it’s about confirming a position within the industry. William Gant, managing director of LJ West Diamonds Australia, said it was an opportunity to increase industry awareness of rare beauties, such as natural pink and other premium fancy colour diamonds.

“Our presence at the Fair is a little different, we aren’t only here with a direct focus on selling based on the nature of our products,” he said.

“We also come to meet our partners and to spend some time educating people on the rarest and finest natural colour diamonds and everyone at our stalls has enjoyed their time.

“You get the chance to meet all walks of life at the IJF, this is an industry that’s made up of all kinds of people and personalities and we think it’s great to be here and be a part of it.”

The next major Australian jewellery fair is scheduled to take place in March.

Richemont’s Cartier, Piaget Montblanc and others to move to luxury e-platform